On May 3rd, 2022, Introductory Biology 152 students including several who worked with labs in the Department of Entomology presented posters on their research at a symposium in Union South. Great job, Morgan, Maya, and Mikaela!! 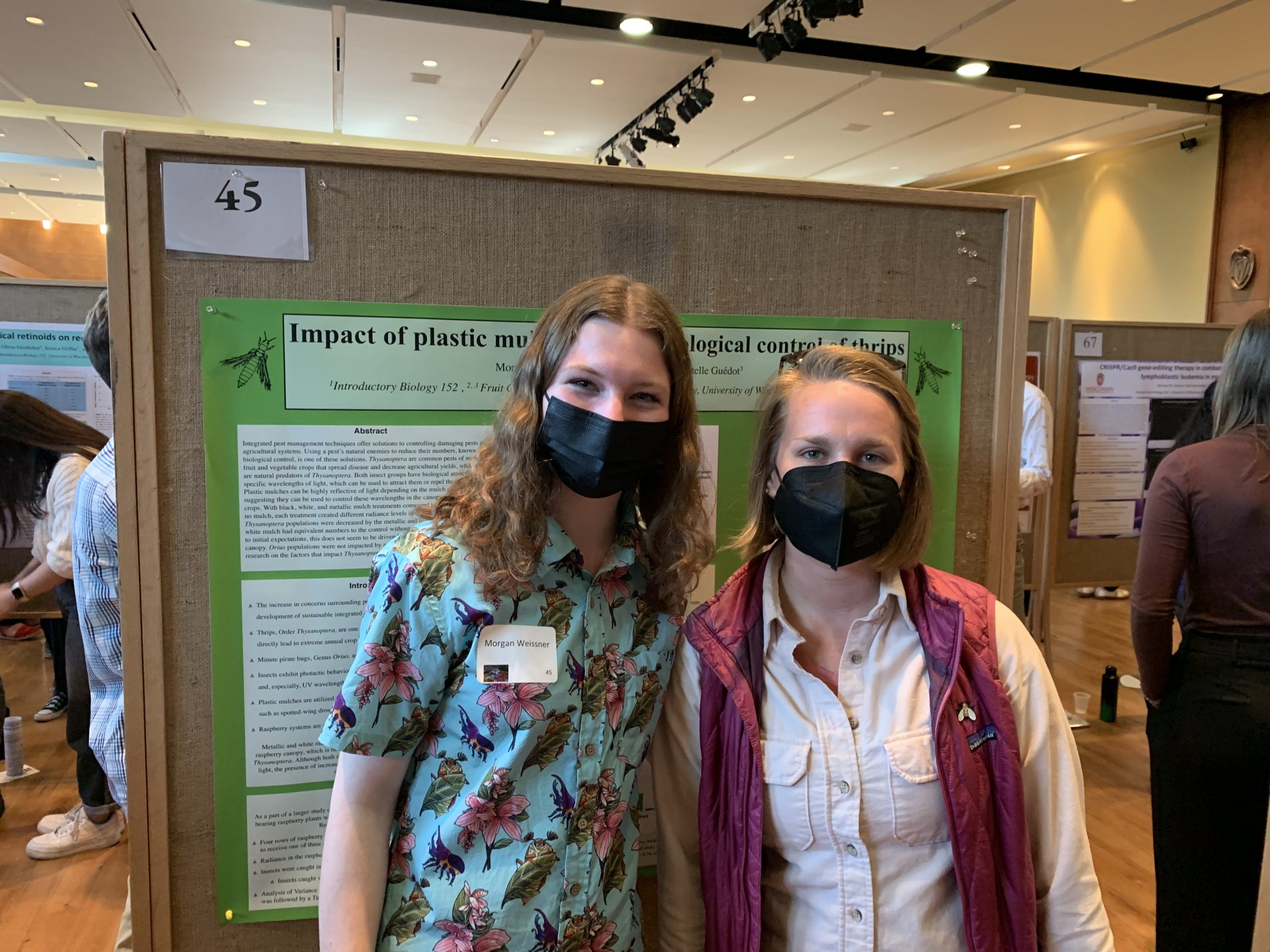 Morgan Weissner: Impact of plastic mulches on the biological control of thrips

Abstract: Integrated pest management techniques offer solutions to controlling damaging pests in agricultural systems. Using a pest’s natural enemies to reduce their numbers, known as biological control, is one of these solutions. Thysanoptera are common pests of many fruit and vegetable crops that spread disease and decrease agricultural yields, while Orius are natural predators of Thysanoptera. Both insect groups have biological attractions to specific wavelengths of light, which can be used to attract them or repel them from crops. Plastic mulches can be highly reflective of light depending on the mulch color, suggesting they can be used to control these wavelengths in the canopy of raspberry crops. With black, white, and metallic mulch treatments compared to a control plot with no mulch, each treatment created different radiance levels in the raspberry canopy. Thysanoptera populations were decreased by the metallic and black mulches, while the white mulch had equivalent numbers to the control without a mulch. However, in contrast to initial expectations, this does not seem to be driven by changes in radiance in the canopy. Orius populations were not impacted by any of the plastic mulches. Further research on the factors that impact Thysanoptera and Orius populations is needed. 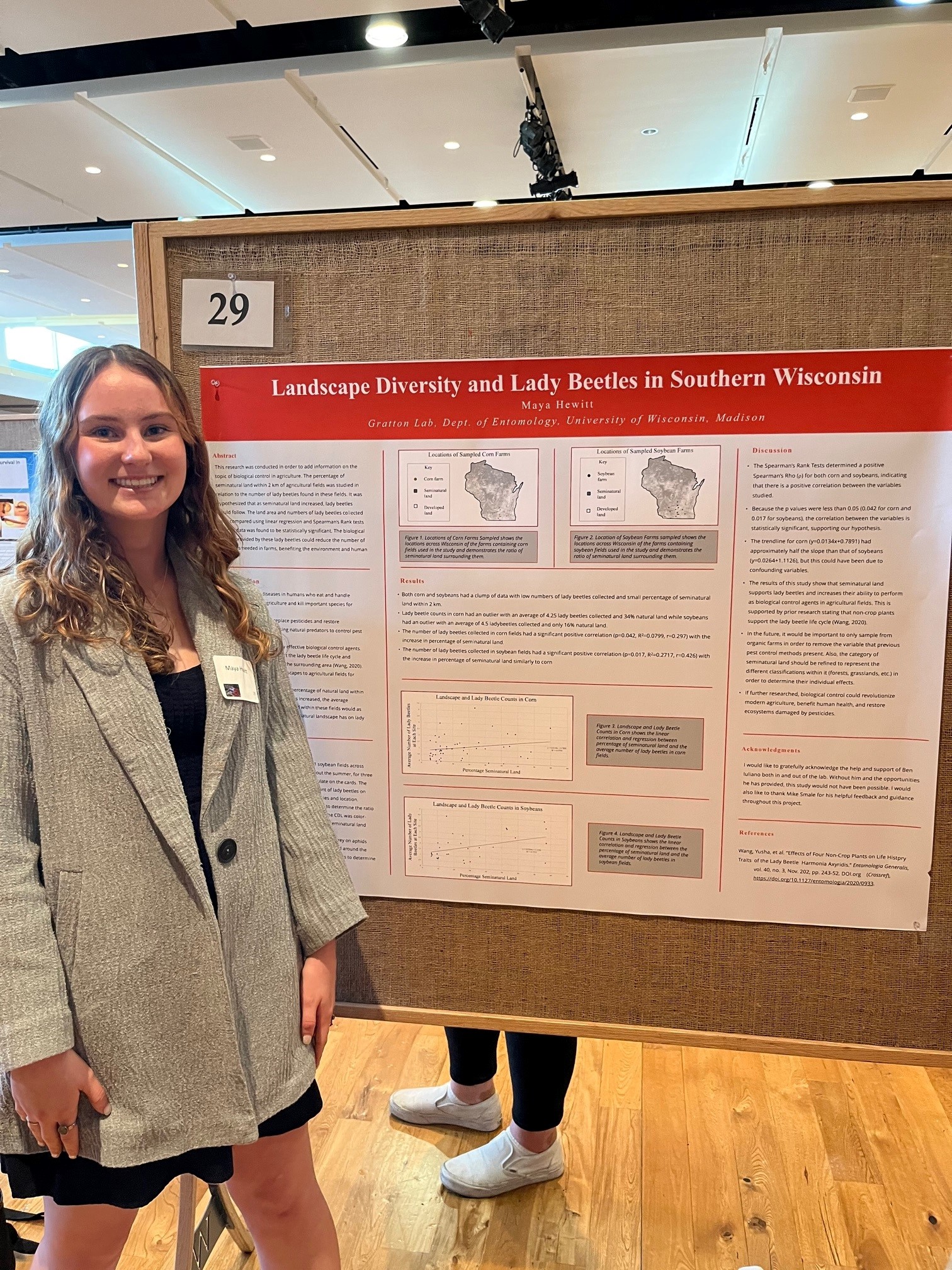 Abstract: This research was conducted in order to add information on the topic of biological control in agriculture. The percentage of seminatural land within 2 km of agricultural fields was studied in relation to the number of lady beetles found in these fields. It was hypothesized that as seminatural land increased, lady beetles would follow. The land area and numbers of lady beetles collected were compared using linear regression and Spearman’s Rank tests and the data was found to be statistically significant. The biological control provided by these lady beetles could reduce the number of pesticides needed in farms, benefiting the environment and human health. 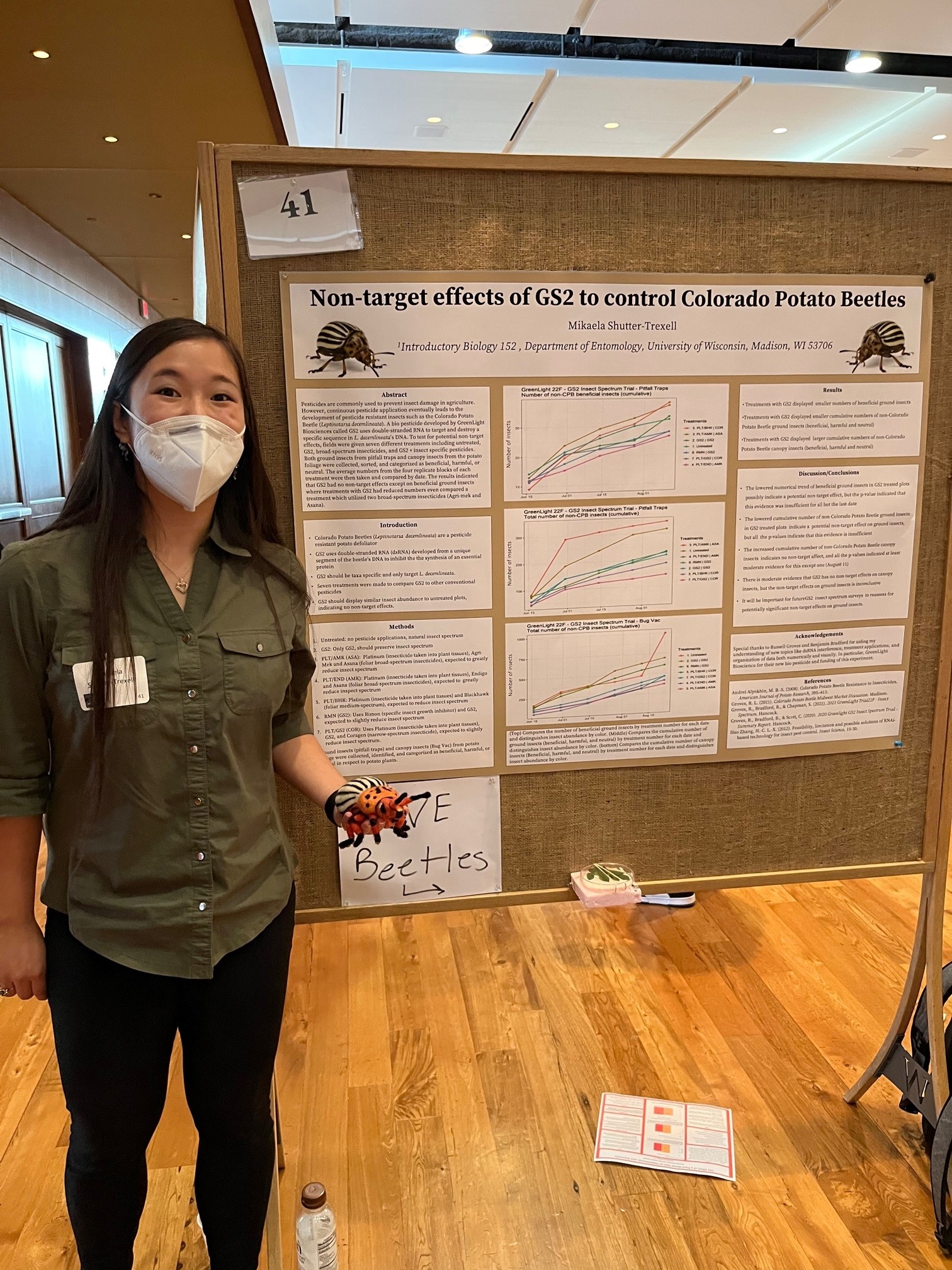 Abstract: Pesticides are commonly used to prevent insect damage in agriculture. However, continuous pesticide application eventually leads to the development of pesticide resistant insects such as the Colorado Potato Beetle (Leptinotarsa decemlineata). A bio pesticide developed by GreenLight Biosciences called GS2 uses double-stranded RNA to target and destroy a specific sequence in L. decemlineata’s DNA. To test for potential non-target effects, fields were given seven different treatments including untreated, GS2, broad-spectrum insecticides, and GS2 + insect specific pesticides. Both ground insects from pitfall traps and canopy insects from the potato foliage were collected, sorted, and categorized as beneficial, harmful, or neutral. The average numbers from the four replicate blocks of each treatment were then taken and compared by date. The results indicated that GS2 had no non-target effects except on beneficial ground insects where treatments with GS2 had reduced numbers even compared a treatment which utilized two broad-spectrum insecticides (Agri-mek and Asana).