A special congratulations is also due to our friend and colleague, Dr. Richard (Rick) Lindroth who will be retiring from the Department of Entomology after 37 years of a highly successful career as a celebrated chemical ecologist. Rick has been awarded several professorships here at the UW-Madison to include the Kellett Mid-Career Award, the Vilas Distinguished Achievement Professorship, and the Hilldale Professorship Award. Rick has also been awarded the ISCE Silverstein-Simeone Award, has been elected Fellow of the Ecological Society of America, and has traveled extensively through his career and given a number of honorary lectures. Dr. Lindroth has published over 200 peer-reviewed journal articles  and his work has been cited over 20K times with an amazing h-index of 77 (Google Scholar). Rick also served as Associate Dean for Research at the UW-Madison, CALS. He is truly an exceptional scientist and we have all benefited greatly from his expertise and guidance in the Department over these many years.

The Department hosted a celebration of Rick’s career at the Nakoma Country Club in late September where many of Rick’s colleagues, family, friends and former students/trainees gathered to support Rick and wish him all the best! Rick, we wish you health and continued success ahead and fair weather for your back-cast. Rick will formally retire this coming summer, 2023 so he will be with us for a few months to come. 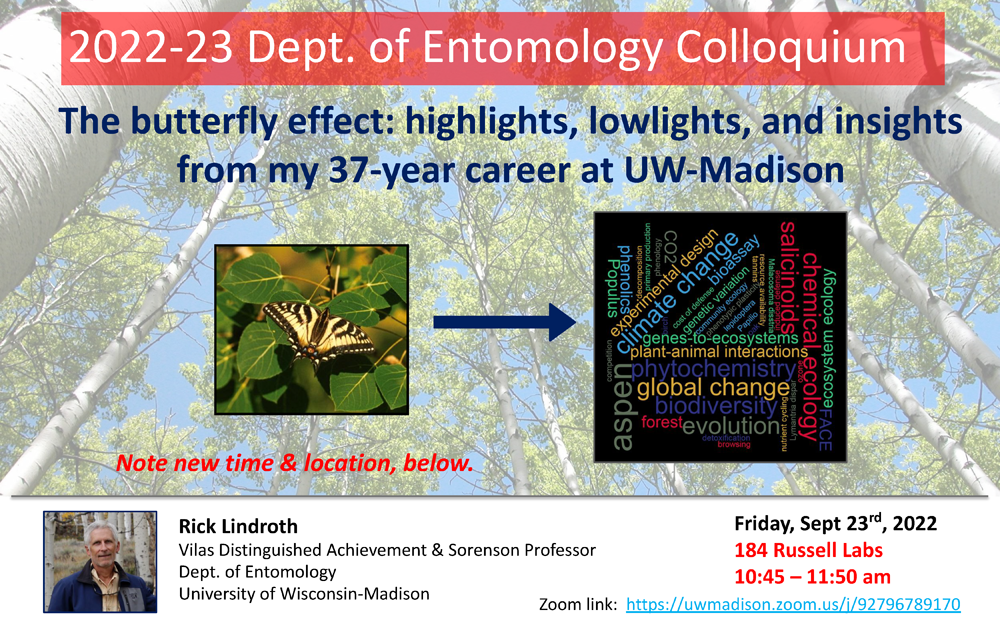 On September 23rd, 2022, Rick gave a seminar highlighting his career in the Department titled “The butterfly effect: highlights, lowlights, and insights from my 37-year career at UW-Madison”. Watch a recording of the seminar here.