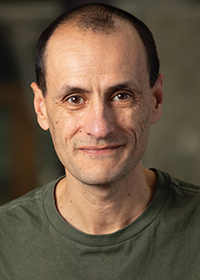 Claudio Gratton, professor in the Department of Entomology, was recently awarded the Kellett Mid-Career Award. Read the original story from news.wisc.edu here, explanation of awards re-posted below:

Thirty-three members of the University of Wisconsin–Madison faculty have been awarded fellowships for 2021-22. The awardees span the four divisions on campus: arts and humanities, physical sciences, social sciences and biological sciences.

“Each year we recognize faculty members at various stages in their careers, who excel in their research areas,” says Steve Ackerman, vice chancellor for research and graduate education. “This year’s awardees are talented individuals who have shown extraordinary originality and dedication during the pandemic. Each has established an exemplary record of research and scholarly activity that has advanced the university’s research mission.”

The awards are made possible because of the research efforts of UW–Madison faculty and staff. Technology that arises from these efforts is licensed by the Wisconsin Alumni Research Foundation and the income from successful licenses is returned to the Office of the Vice Chancellor for Research and Graduate Education, where it’s used to fund research activities throughout the divisions on campus, including these awards.

Eight faculty are appointed to WARF Named Professorships. The awards, which come with $100,000, honor faculty who have made major contributions to the advancement of knowledge, primarily through their research endeavors, but also as a result of their teaching and service activities. Award recipients choose the names associated with their professorships.

Fourteen faculty have received H.I. Romnes Faculty Fellowships, recognizing faculty within their first six years from promotion to a tenured position. The award is named in recognition of the late WARF trustees president H.I. Romnes and comes with $60,000 that may be spent over five years.

Eleven faculty have been honored with Kellett Mid-Career Awards to support those who are seven to 20 years past their first promotion to a tenured position. The award was created to provide support and encouragement to faculty at a critical stage of their careers. The honor, named for the late William R. Kellett, a former president of the WARF board of trustees and president of Kimberly-Clark Corporation, comes with $75,000 that may be spent over five years.